The war killed Bob Kurtz. It just took seven years for the war to catch up to him.

Kurtz was copilot of a B-24 Liberator that was shot down over Ehrwald, Austria, in 1944. Two crew members were killed, and eight others, including Kurtz, parachuted to safety but were taken prisoner. They endured long, forced marches, frostbite, and starvation. Bob Kurtz weighed 140 pounds when he was captured; he weighed 85 when he was liberated, and in 1952, his weakened heart gave out. 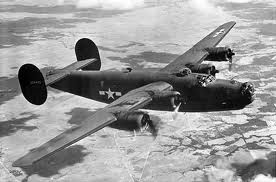 He was 33 and left a wife and four boys. The youngest, Jim Kurtz, was just 2 years old when his father died. Jim Kurtz grew up wondering about the father he never knew, about the defining moment of his father’s life, when a big plane was shot out of a bigger sky, half a world away.

Four thousand miles away, Gerd Leitner grew up with the same preoccupation. He was 7 years old, eating lunch on the porch of his house high in the Alps, when he saw the smoking hulk of a B-24 crash into the side of a mountain called the Brendlkar. He watched with wonder as men who jumped from the plane floated to earth. He watched with fear as German soldiers surrounded the parachutes, barking orders, pointing guns. He grew into a man and learned everything he could about the little slice of the war that unfolded before his eyes. 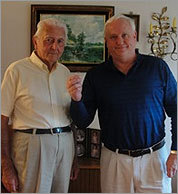 Nine years ago, searching for his father’s legacy, Jim Kurtz found Gerd Leitner on the Internet. Leitner invited Kurtz to come to Ehrwald, where he had built a memorial to those who died and those who were marched away at gunpoint.

Jim Kurtz went to Austria and met a woman, Hilde Richter, who watched his father’s capture. The German soldiers were jumpy, yelling and screaming, and she thought they were going to shoot Bob Kurtz. Then he pulled a baby shoe from his jacket and held it out. The shoe belonged to his first-born, his namesake. He didn’t know how to say he was a father in German but the tiny shoe said it for him. His captors lowered their guns and ordered him to walk with his hands up.

Jim Kurtz met the German pilot who shot his father’s plane down.

Kurtz hiked to the crash site, which is covered by snow 10 months of the year, and took his father’s seat from the wreckage. He keeps it in his North Andover home. He learned, from talking to other men on the plane, that his father saved a crew member’s life, pausing in his own dash for a parachute to free a gunner who had become entangled.

That would have been plenty, enough information, enough memories, for a lifetime but then Jim Kurtz went back to Austria last month and Gerd Leitner pulled him aside. A local farmer had, after more than 60 years, confessed to taking a wedding ring off one of the Americans on the plane. In a fit of conscience, he gave it to Leitner.

“Maybe,’’ Gerd Leitner told Jim Kurtz, pressing the ring into his hand, “you can find the family.’’
Kurtz came back to Massachusetts and went through all his files. He figured out the ring belonged to Staff Sergeant Charlie Sellars, the tailgunner who went down with the plane. The farmer had taken the ring off a dead man’s hand.

But how to find Charlie Sellars’s family?

Kurtz talked to a general who told him to call a woman in Ohio named Carole Williams. She’s a genealogist, and she can find anyone, and she quickly found Ken Sellars, Charlie’s 79-year-old brother, in upstate New York.

“When I first called Ken, out of the blue, I think he thought it was some scam,’’ Jim Kurtz said. “But I told him I had something that belonged to his brother that I wanted to return.’’
Jim Kurtz drove up to Syracuse and handed Ken Sellars the ring. Charlie Sellars’s wife had remarried, but died young, 40 years ago.

There is an inscription on the ring: orange blossoms. Nobody, not even what’s left of Charlie Sellars’s family, knows what it means.

Charlie Sellars’s family didn’t know he was dead until after the war. Even then, they didn’t know what happened on the Brendlkar.

Charlie Sellars wasn’t a member of the plane’s crew; he had volunteered for that final mission, thinking it was his ticket home. He had flown 48 missions, and you got shipped home after 50. And because he had volunteered to fill in for one of three men on Bob Kurtz’s crew who had been hurt in an accident, he was going to get credit for two missions. Charlie’s last letter to his mother made it sound like he’d be back home in no time. Instead, he died an ugly death in a beautiful place. He was 22.

Charlie Sellars’s body never left the Alps, but Ken Sellars brought Jim Kurtz to the cemetery in upstate New York where the family put up a headstone.

As he stood in the cemetery, Jim Kurtz felt his lower lip tremble: he went looking for his father and found Charlie Sellars.

“Jim gave us a lot more than a ring,’’ Ken Sellars said. “He gave us the story we never had, what really happened.’’

Ken Sellars paused, searching for the words, remembering a brother who never came home.
“He gave us a piece of Charlie,’’ Ken Sellars said.

He was 33 and left a wife and four boys. The youngest, Jim Kurtz, was just 2 years old when his father died. Jim Kurtz grew up wondering about the father he never knew, about the defining moment of his father’s life, when a big plane was shot out of a bigger sky, half a world away.