Legend of the Champ

Stubborn, competitive, athletic, rebellious, street-smart, hustler, and able to skip a class without an ounce of regret; these are traits of young SAE’s which have earned us the privilege to join Penn Delta. These are also the traits of a young Irish lad, growing up in Gettysburg, many years before becoming an icon of our great fraternity. His legend lives in the memories of so many that he has touched.

Gettysburg is an interesting place and even after 20 years of visiting, I am still amazed of the town’s unique personality. At the college, I chuckle at how crisp and clean the campus always looks. Money well spent. The house as well, ageless, always seems to shine with the pride of a strong brotherhood. But when I head south and cross the railroad tracks into town, I feel like I’m entering a time warp. I see a culture and landscape that is permanently etched by the great battle of the Civil War. I feel the history of the place and respect the hallowed ground where so many gave their last full measure of devotion. I am learning that this feeling does not dissipate with time and minus one giant steel tower, this place just doesn’t seem to change.

I try to imagine Gettysburg in the 1930’s, obviously less commercial, but probably a humble place for the people, especially during the depression. So it was for young Bobby McKenrick growing up in small town fashion but unlike most, he wasn’t going to travel the beaten path. By adolescence, he would master a skill that would make him larger than life in South Central Pennsylvania.

Harold and Bobby McKenrick had little intentions of following their father to the furniture factory and school; well it probably took up too much valuable time as well. Depression era pool halls were not places where career plans were founded yet these two brothers had different thoughts. Spending days and nights in the smoke filled room, it wasn’t long before young Bobby was learning a different kind of English and became quite good at the Billiard’s game. Soon he was running tables and became the best shooter at Eckles Pool Hall in Gettysburg. The best in the town came to the seedy establishment, but he would beat them all and this young “Champ” became a town celebrity.

His reputation made it to a wealthy gambler operating in Harrisburg. This stakehorse would send a car to pick up Champ and send him to “tournaments” and various pool halls throughout the area to win money. Champ was now a legend and on his way to becoming the best of the best. Unfortunately, as fate would have it, war was brewing and soon his nation would call for his service. He would leave his pool cue behind. 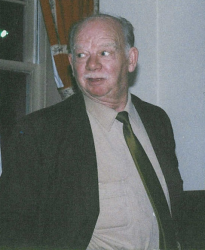 Charles Robert “Champ” McKenrick. For many of us, HE was the House.

Not all of Champ’s earnings were spent on booze and cigarettes. He did fancy a young sweetheart and had won enough money to buy her a diamond engagement ring. Sadly, she would not be there when he returned from the war.

Nor would his passion for the game. War changes a man and Champ was no exception. Rare was the occurrence when he would pick up a cue again and display his mastery. Only the lucky few would see him in the basement of the legion and run a table. Even after his daily Budweiser medicine, he could quiet a room and prove he was still the Champ. Young, handsome, and a natural, one can only help but wonder, if fate had been different, would Paul Newman be portraying Champ’s story and not “Fast Eddie” Felson’s?